As I explained in this column’s first installment, this series is an expansion of my Fantastic Stories of the Imagination article titled [http://carlbrandon.org/2020/01/crash-course-in-the-history-of-black-science-fiction-and-fantasy/]A Crash Course in the History of Black Science Fiction.”  (That essay is now hosted [http://carlbrandon.org/?p=1350&preview=true]here and [http://www.nisishawl.com/CCHBSF.html]on my personal website.)  At [https://www.tor.com/]Tor.com’s invitation I agreed to delve more deeply into each of the 42 titles on that list in turn.

The original essay became a popular reference–apparently there wasn’t anything else like it available.  The Carl Brandon Society’s website seems a good home for both the Crash Course and my subsequent expansions, so with the agreement of Tor.com I’m republishing them here on a monthly basis.  This ninth one looks at Walter Mosley’s 2001 collection [https://en.wikipedia.org/wiki/Futureland]Futureland: Nine Stories of an Imminent World.

Mosley is best known for his crime fiction–especially for the Easy Rawlins mysteries set in mid-Twentieth Century Los Angeles but written from 1990 through the present.  His work is often compared with that of Raymond Chandler, one of LA Noir’s original practitioners.  The narratives, plots, and overall aesthetic of science fiction’s cyberpunk subgenre owe a debt to Noir as well; Futureland takes on that debt along with its setting’s cyberpunkish body-integrated electronics and highly polarized wealth.  Yet another contributing literary moment may be noticeable to the book’s readers: 1950s and 60s sci-fi is evoked by neologisms such as “Glassone” and “plasteel,” and an eccentric billionaire who replaces his skull with a transparent dome.  So to sum up influences, here we have a renowned African American author of a retrospective inclination revisiting both the past’s future and the present’s future, which includes that current future’s nods to the past.

The nine tales Mosley tells in Futureland are set for the most part in mid-Twenty-first Century North America.  They share background and characters: the child-genius protagonist of the opening story, “Whispers in the Dark,” is later glancingly referred to as a captive of the prison-industrial complex described in detail in “Angel Island,” and makes another appearance as a revolutionary mastermind in the collection’s penultimate story, “En Masse.”

Though their plots are self-contained, together these nine pieces describe a dystopia in which wealthy corporations and individuals control the majority of the world’s population via money, drugs, and repressive laws.  Read them in the order of the book’s Table of Contents and you’ll be shown how profit-centered misery can be confronted and demolished using love and x-rays.  Time has a long narrative arc that soars implacably high above the lesser arcs of human lives, periodically plunging down to anchor itself in their decision points.  This history of the future both focuses on the personal and ranges far beyond its limited concerns, and Mosley’s structural choice of linked short stories highlights the dual nature of his SF vision.

Stroke victims, parolees, boxing champions, addicts, and prostitutes inhabit Futureland side-by-side with US Senators, Einstein-like intellectual prodigies, and Persian heiresses–and sometimes they’re actually the same characters.  Seamy-side surroundings are a staple of Noir films and novels, and Mosley extrapolates what the sorts of locales will be like in the 2050s convincingly, updating their denizens, poverty workarounds, slangs, and peccadillos.  This is his bailiwick, his accustomed turf:  underneath society’s surface of supposed normalcy dwell the movers and shakers of his imagined world.

In contrast to the pernicious [https://en.wikipedia.org/wiki/Great_man_theory]Great Man Theory, important actions are carried out by obscure workers like Neil Hawthorne in “En Masse,” who shifts the aim of a neo-Nazi bioweapon’s to an unexpected target.  Activist communities form a series of soi-disant Radical Congresses, one of which sends an envoy to wrest control of a fuel monopoly from a villainously eccentric capitalist.  In “Little Brother” a habitual criminal’s legal stratagems forever alter the makeup of a piece of disembodied judicial software.  And so on.

Though Black himself, and though writing mostly about others of African descent, Mosley doesn’t restrict himself to characters and subjects typically associated with the race.   Yes, as I just said, most of his characters live on the lower end of the economic scale.  But any [https://en.wikipedia.org/wiki/Urban_fiction]“street lit” stereotypes that could be applied to them are undermined by the overall inclusiveness of the author’s cast and by his characters’ intersectionality and innate three-dimensionality.  Because African Americans stand at the center of Mosley’s fictional stage, but they’re by no means alone on it.  They’re joined by Yasmin, a Central Asian sex-worker; Jamey, protagonist Harold’s Caucasian friend and cubicle mate; and many others.  And they’re enmeshed in complicated existences as Jews and computer programmers and fans of Japanese soap operas.  Full-fleshed and plausible, they’re seated in a well-developed matrix that defies reduction to flat black and white.

“In this world where the last thing you got to worry about is skin color,” says Black private eye Folio Jones, “they still wanna kill me.”  Jones is complaining about the malice of neo-Nazi White supremacists who have concocted a plague to rid the Earth of everybody of African descent.  Among SF readers of color, countless White-only futures have led to our speculation about the unremarked-upon epidemics which must have wiped us out.  Matt Ruff’s novel [https://jamesdavisnicoll.com/review/also-there-is-a-shark]Sewer, Gas & Electric tackles the improbability of such a solution to the puzzle of our absence by foregrounding it and presenting the assumed race-based plague as a fait accompli.  In Futureland, Mosley takes the foray into irony a step further when his unlikely hero induces a mutation in the bigot-engineered disease organism that causes it to fatally attack everyone except people of African descent.

The audacity of not just highlighting but upending this nasty trope is an excellent fit with Mosley’s main move: boldly laying claim to SF’s imaginative territory.  Of the many reasons why this book’s a crucial part of any course in the history of Black SF, that’s the biggest one: that he dares to put it out there, smack dab in the middle of the genre where he knows it belongs.

The winner of the 2019 Carl Brandon Parallax Award is Pet by Akwaeke Emezi from Random House Children’s Books. The 2019 Carl Brandon Kindred Award winner is “Doll Seed” by Michele Tracy Berger published in FIYAH Magazine of Black Speculative Fiction. “The jury considers works published in the preceding year. So, these winners were published in 2019 and selected in 2020,” explained Carl Brandon steering committee member Candra K. Gill. “Both authors will receive a $1000 cash prize in addition to the physical award.”

The honors list for the 2019 Parallax Award is “Mister Dog” by Alex Jennings, “Kali_Na” by Indrapramit Das, “The Freedom of the Shifting Sea” by Jaymee Goh, “Harvest” by Rebecca Roanhorse, A Spectral Hue by Craig Laurence Gidney, and David Mogo: God Hunter by Suyi Davies Okungbowa.

The honors list for the 2019 Kindred Award is Queen of the Conquered by Kacen Callender, “Blood Is Another Word for Hunger” by Rivers Solomon, “Burn the Ships” by Alberto Yáñez, and “A Brief Lesson” in Native American Astronomy by Rebecca Roanhorse.

Details of the upcoming online presentation ceremony will be forthcoming soon.

For jury statements on the awards’ winners and honors lists and a list of previous winners, please visit carlbrandon.org/awards. Nominations for the 2020 Parallax and Kindred Awards are now open; access the nominations form there also. 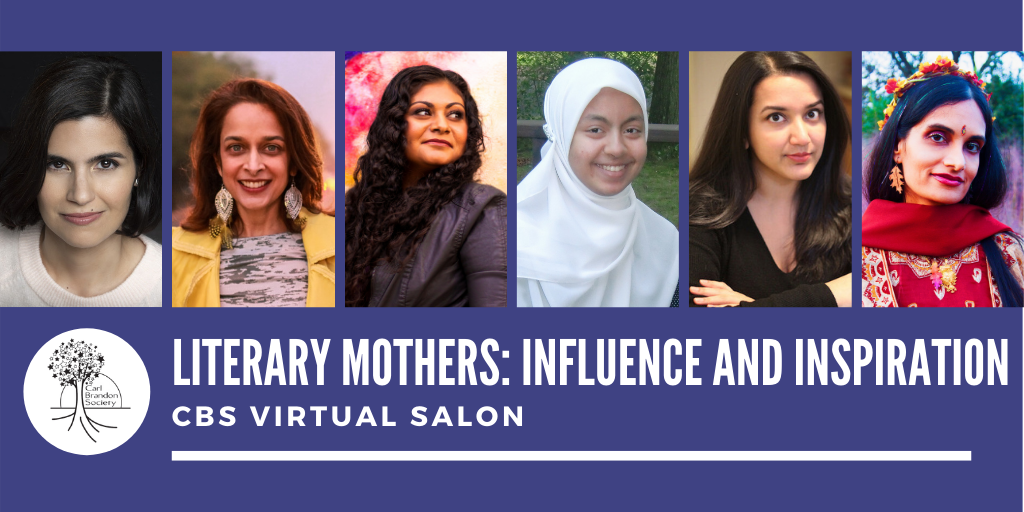 Desi authors Tanaz Bhathena (Hunted by the Sky), Tanuja Desai Hidier (Born Confused), Prerna Pickett (If You Only Knew), Karuna Riazi (The Battle), Swati Teerdhala (The Archer At Dawn), and Shveta Thakrar (Star Daughter) gathered for an evening salon celebrating the books, music, art, and people that inspired and influenced their work.