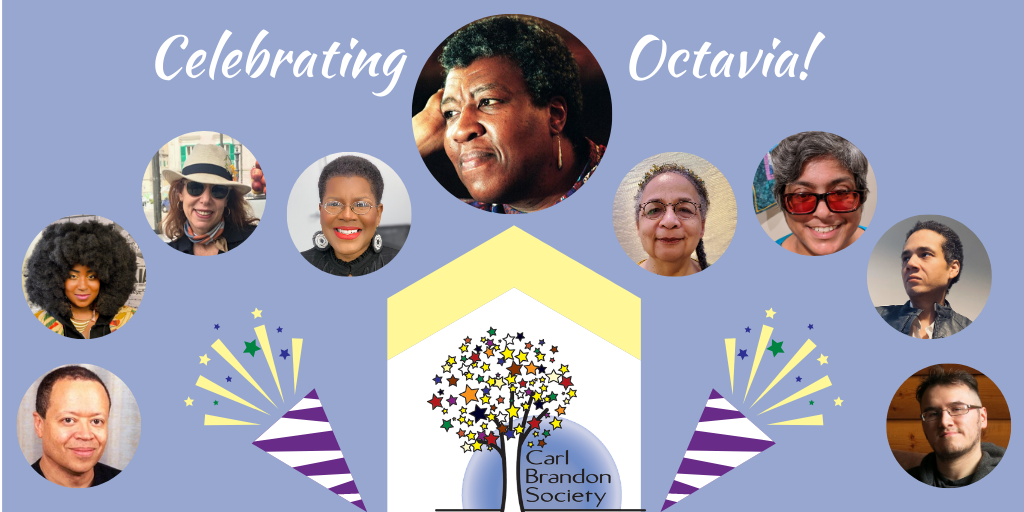 The Carl Brandon Society celebrated the birthday of the much missed Octavia E. Butler (June 22, 1947 – February 24, 2006) with two #CelebratingOctavia events: a virtual birthday party and a spotlight on some of the recipients of the scholarship named in her honor.

We wanted to honor the fact that that Butler was a visionary genius whose fiction continues to be relevant and insightful and also that she was a wonderful, kind person and great friend. And, as we’re committed to keeping her legacy alive, we’re following her example by supporting the next generation of science fiction, fantasy, and horror writers–especially writers of color.

This spotlight celebrates recipients of the Octavia E. Butler Memorial Scholarship: authors Christopher Caldwell, Shweta Narayan, Dennis Staples, and Kai Ashante Wilson. They read from their work and/or talk about how the scholarship and attending the Clarion or Clarion West workshops impacted them as writers.

If you’d like to donate to us directly and support the Octavia E. Butler Memorial Scholarship or our other major programs, such as the Parallax and Kindred Awards, you can mail donations to:

or donate via PayPal:

These videos have auto-generated captions. We will provide corrected captions and possibly transcripts as soon as we are able.

Steven is a New York Times bestselling, award-winning novelist, screenwriter, and creator of the Lifewriting writing course. He has been nominated for Hugo, Nebula, and Cable Ace awards, won an Emmy for the “A Stitch In Time” episode of The Outer Limits, and an NAACP Image Award as co-author of the Tennyson Hardwick mystery series with actor Blair Underwood and his wife, Tananarive Due.

Steven has written three million words of published fiction published in seven languages, including comic books and over 20 novels. His television credits include Baywatch, Stargate SG-1, and Andromeda. In addition to Lifewriting, he teaches webinars on Afrofuturism and Black Horror.

Tananarive is an award-winning author who teaches Black Horror and Afrofuturism at UCLA. She is an executive producer on Shudder’s groundbreaking documentary Horror Noire: A History of Black Horror. She and her husband/collaborator Steven Barnes wrote “A Small Town” for Season 2 of “The Twilight Zone” on CBS All Access.

A leading voice in black speculative fiction for more than 20 years, Due has won an American Book Award, an NAACP Image Award, and a British Fantasy Award, and her writing has been included in best-of-the-year anthologies. Her books include Ghost Summer: Stories, My Soul to Keep, and The Good House. She and her late mother, civil rights activist Patricia Stephens Due, co-authored Freedom in the Family: a Mother-Daughter Memoir of the Fight for Civil Rights. She is married to author Steven Barnes, with whom she collaborates on screenplays. They live with their son, Jason, and two cats.

Merrilee represents authors of books for adults and children, including several #1 New York Times bestsellers and recipients of major awards and honors. She represented MacArthur Grant recipient Octavia E. Butler for the last 18 years of her life, and since 2006, has been the Literary Executor of the Butler Estate, for which she oversees licensing film and TV rights, translations, stage rights, permissions, and advises on scholarships and charities benefiting writers of color. Her Children’s Book authors have won, among them, three Newbery Medals and she would love to find more quality storytellers of diverse backgrounds.

Nisi is the author of Everfair, Talk Like A Man, and dozens of short stories, many of which can be found in the James Tiptree, Jr. Award winning and World Fantasy Award nominated collection Filter House. She’s the co-author of Writing the Other and teaches seminars and classes on writing inclusive, representational fiction.

Nisi is the co-editor of Stories for Chip, Strange Matings: Octavia E. Butler, Feminism, Science Fiction, and African American Voices, and most recently New Suns: Original Speculative Fiction by People of Color. She edits reviews for The Cascadia Subduction Zone, a literary quarterly from Aqueduct Press. She is a founding member of the Carl Brandon Society and has served on the board for the Clarion West writing workshop.

Sheree creates art inspired by myth and folklore, natural science and conjure, and the genius culture created in the Mississippi Delta. She is the author of Nine Bar Blues: Stories from an Ancient Future, her first fiction collection. She is also the author of two multigenre/hybrid collections, Sleeping Under the Tree of Life, longlisted for the 2016 Otherwise Award, and Shotgun Lullabies, described as a “revelatory work like Jean Toomer’s Cane.”

She edited the two-time World Fantasy Award-winning volumes, Dark Matter, that first introduced W.E.B. Du Bois’s work as science fiction and was the first black author to be honored with the World Fantasy Award since its inception in 1975. Sheree serves as the Associate Editor of Obsidian: Literature & Arts in the African Diaspora . A former New Yorker, she lives in her hometown, Memphis, Tennessee near her mother and the mighty river that is her muse.

Christopher Caldwell is a queer, Black American living abroad in Glasgow, Scotland. He was the 2007 recipient of the Octavia E. Butler Memorial Scholarship for Clarion West. His work has appeared in Strange Horizons, FIYAH, and Uncanny Magazine among others. He is @seraph76 on twitter.

Shweta Narayan was born in India, has lived in Malaysia, Saudi Arabia, the Netherlands, Scotland, and California, and feels kinship with shapeshifters and other liminal beings. Their short fiction and poetry have appeared in places like Lightspeed, Transcendent 3, Tor.com, and Strange Horizons. One of their Clarion submissions stories, Pishaach, got edited into shape after going through Clarion critiques, and went on to lose a Nebula.

Shweta’s been mostly dead since 2010, but they write when health allows.

Dennis E. Staples, author of This Town Sleeps, is an Ojibwe writer from Bemidji, Minnesota. He graduated from the Institute of American Indian Arts with an MFA in fiction. He is a graduate of the 2018 Clarion West Writers Workshop and a recipient of the Octavia E. Butler Memorial Scholarship. His work has appeared in Asimov’s Science Fiction and Nightmare magazine. He is an enrolled member of the Red Lake Nation.

Kai Ashante Wilson was the 2010 Octavia Butler scholar at the Clarion writing workshop in San Diego. He won the Crawford award for best first novel of 2016, and his works have been shortlisted for the Hugo, Nebula, Shirley Jackson, Theodore Sturgeon, Locus, and World Fantasy awards. Most of his stories can be read, gratis, at Tor.com. His novellas The Sorcerer of the Wildeeps and A Taste of Honey may be ordered at your local bookstore or online. Kai Ashante Wilson lives in New York City.