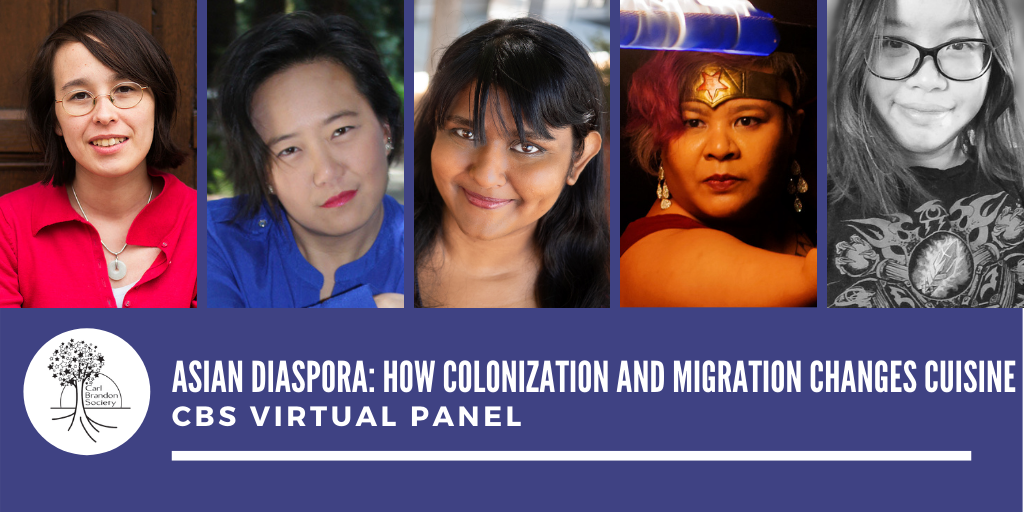 Food, sharing, cooking and eating is such an important part of many cultures — including survival, family, a sense of place. With over 60% of the world’s population, and a longer history of migration, colonization, empire — food has changed significantly as people have moved.

Aliette de Bodard lives and works in Paris. She has won three Nebula Awards, a Locus Award, a British Fantasy Award and four British Science Fiction Association Awards, and was a double Hugo finalist for 2019 (Best Series and Best Novella). Her most recent book is Of Dragons, Feasts and Murders, a fantasy of manners and murders set in an alternate 19th Century Vietnamese court. Her short story collection Of Wars, and Memories, and Starlight is out from Subterranean Press.

Jaymee Goh is a writer, reviewer, editor, and essayist of science fiction and fantasy. Her work has been published in a number of science fiction and fantasy magazines and anthologies. She wrote the blog Silver Goggles, an exploration of postcolonial theory through steampunk, and has contributed to Tor.com, Racialicious.com, and Beyond Victoriana.

She graduated from the Clarion Science Fiction and Fantasy Writers Workshop in 2016, and received her PhD in Comparative Literature from the University of California, Riverside, where she dissertated on steampunk and whiteness. She is a Malaysian citizen currently living in Berkeley, California, where she works as an editor for Tachyon Publications.

Nibedita Sen is a Hugo, Nebula, and Astounding Award-nominated queer Bengali writer, editor and gamer from Calcutta. She acquired several English degrees in India before deciding she wanted an MFA too, and that she was going to move halfway across the world for it. A graduate of Clarion West 2015, her work has appeared in venues like Podcastle, Nightmare and Fireside. These days, she can be found in NYC, where she helps edit Glittership, an LGBTQ SFF podcast, enjoys the company of puns and potatoes, and is nearly always hungry.

Michi Trota is a five-time Hugo Award winner, British Fantasy Award winner, and the first Filipina to win a Hugo Award. Michi is Editor-in-Chief of Science Fiction & Fantasy Writers of America (SFWA) and Senior Editor of the news media site Prism. She is also co-editor of the WisCon Chronicles Vol. 12 with Isabel Schechter (Aqueduct Press), has written for Chicago Magazine, and was the exhibit text writer for Worlds Beyond Here: Expanding the Universe of APA Science Fiction at the Wing Luke Museum in Seattle, WA. She’s been featured in publications like the 2016 Chicago Reader People Issue, Chicago Tribune and The Guardian, and has spoken about topics related to feminism, publishing, pop culture, and writing at the Adler Planetarium, the Chicago Humanities Festival, and on NPR. Michi is a firespinner with the Raks Geek Fire+Bellydance troupe, past president of the Chicago Nerd Social Club Board of Organizers, and lives with her spouse and their two cats in Chicago.

Anya Ow is the author of THE FIREBIRD’S TALE and CRADLE AND GRAVE, and is an Aurealis Awards finalist. Her short stories have appeared in publications such as Daily SF, Uncanny, the 2019 Year’s Best Dark Fantasy and Horror anthology and more. Born in Singapore, Anya has a Bachelor of Laws from Melbourne University and a Bachelor of Applied Design from Billy Blue College of Design. She lives in Melbourne with her two cats, working as a graphic designer, illustrator, and chief studio dog briber for a creative agency.